A Jeanneau Sun Fast can give tremendous pleasure to anyone who simply revels in a thoroughbred yacht’s performance and here is a fine example of this in the “Cruise of Sun Fast 3200 Twilight Time from Plymouth to Fowey” last week. She is the later, even sportier R2 version of this very popular race yacht

Dr John Stark and his wife Jennifer may not be in their first flush of youth but they both share the sheer delight that their performance Sun Fast 3200 R2 “Twilight Time” gives them. If you read the (b)log that they prepared for their children about their latest trip to Fowey last week' you will see that the performance of their yacht and her ability to outsail other boats, even on a short cruise, still gives them great pleasure.

We enjoyed reading of their latest exploits and with John and Jennifer’s agreement we thought you might too….

The trip started with an urgent hull clean on Wednesday, 8th September 2021. Lift out, spray clean and back in. For some time, the hull drag had been causing excessive heel and side slip. Not optimal for a long trip

This build-up occurred in less than 5 months 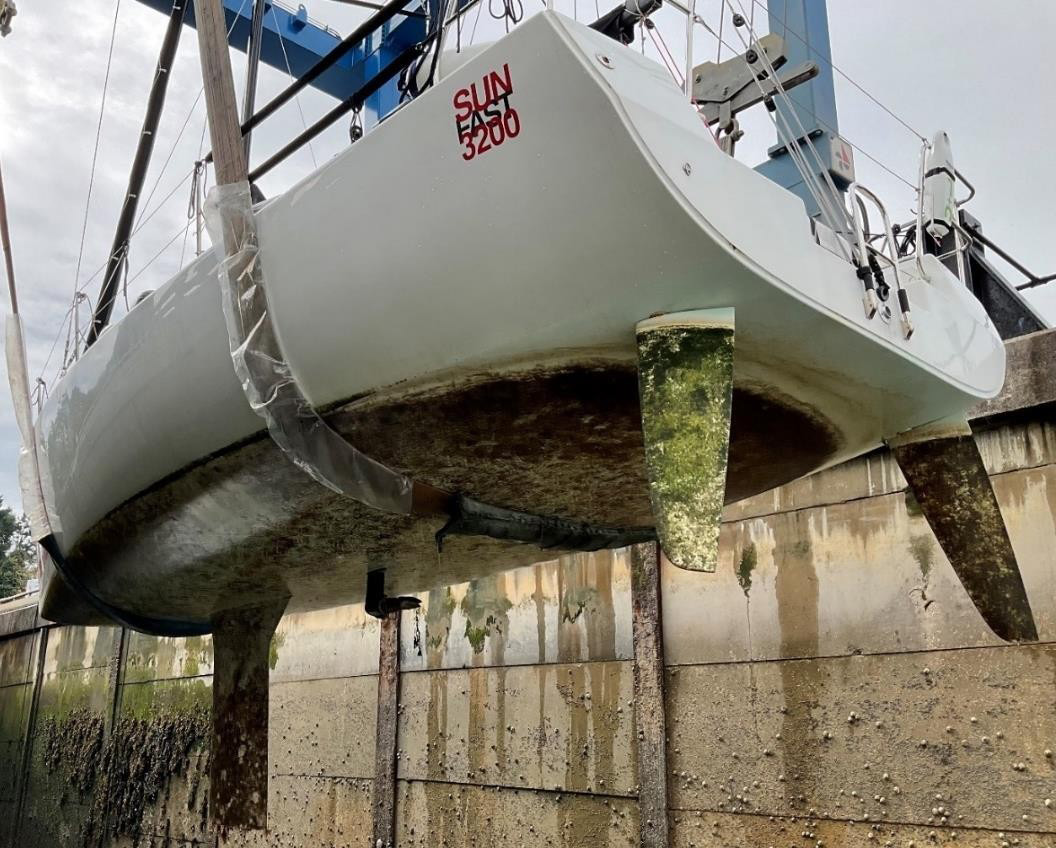 Thursday morning it was misty and raining. What to do, abandon, delay or cancel? I was confident about handling the upwind leg so decided to go for it. Just can’t trust the current weather forecasts. We reached the Breakwater after a number of tacks and were treated to a beautiful sky. 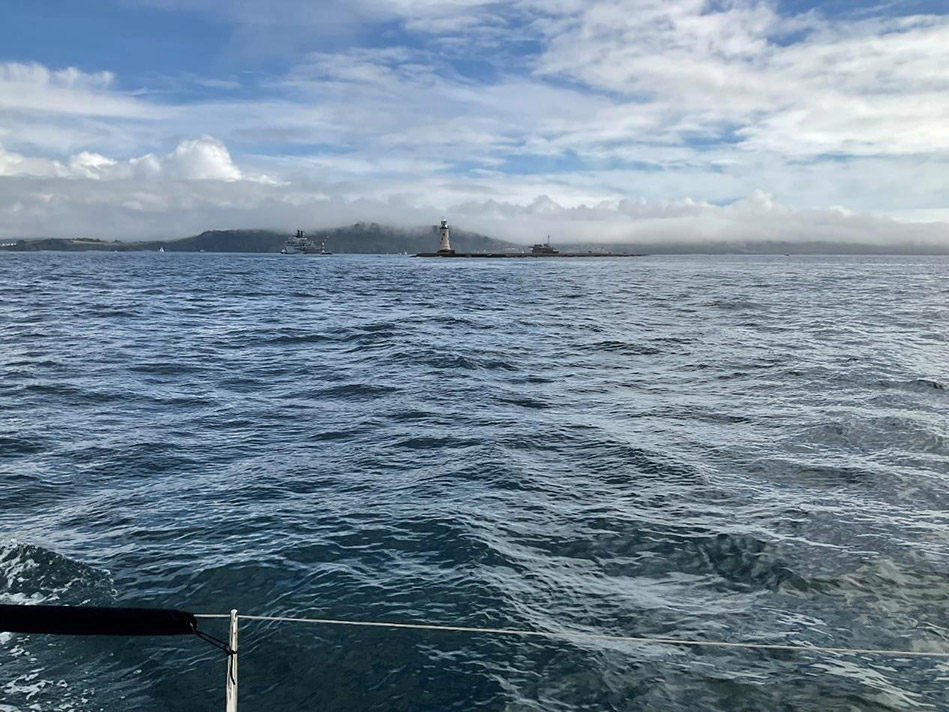 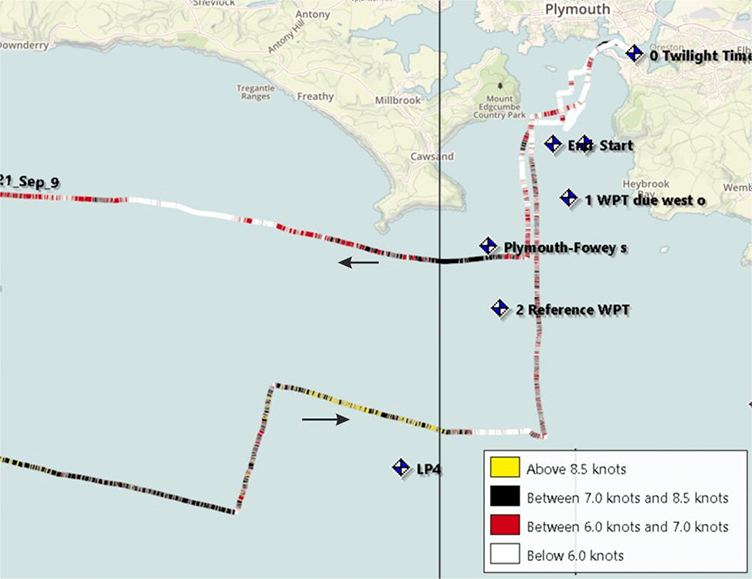 The plan was to reach WPT Plymouth-Fowey start by 12:00 so as to catch a favourable tidal current compromise. Reached it 15min late. Passing Rame Head Twilight Time decided to show us what she can do with a clean bottom.

In Whitsand Bay the wind dropped somewhat for about half an hour, but we were still bowling along at a reasonable speed.

As we approached South of Looe things changed. Wind rose, sea as well. We tacked twice to get far enough away from the overfalls and keep to our WPT route, Twilight Time got into flying mode. Boat speed and SOG 9.3knots on a close reach. Fully in her groove and sailing on one ear, we whizzed Westwards. Did not get a chance to savour

Mum’s carefully prepared lunch as hanging on for dear life. 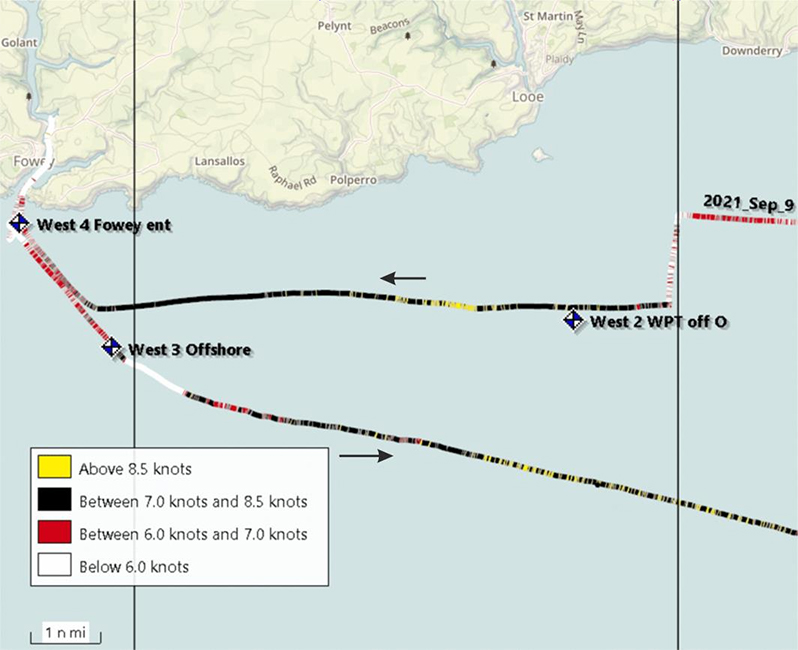 As we approached close to WPT West 4 Fowey, the entrance became visible. Turned into the wind and dropped the sails. Wow, the South Westerly was piling waves into the small bay at the entrance to Fowey making the mainsail flaking a trifle difficult and dangerous. Once completed we motored into Fowey river and dialled up channel 12 on the VHF set and were honoured with an escort to our berth at Mixtow. 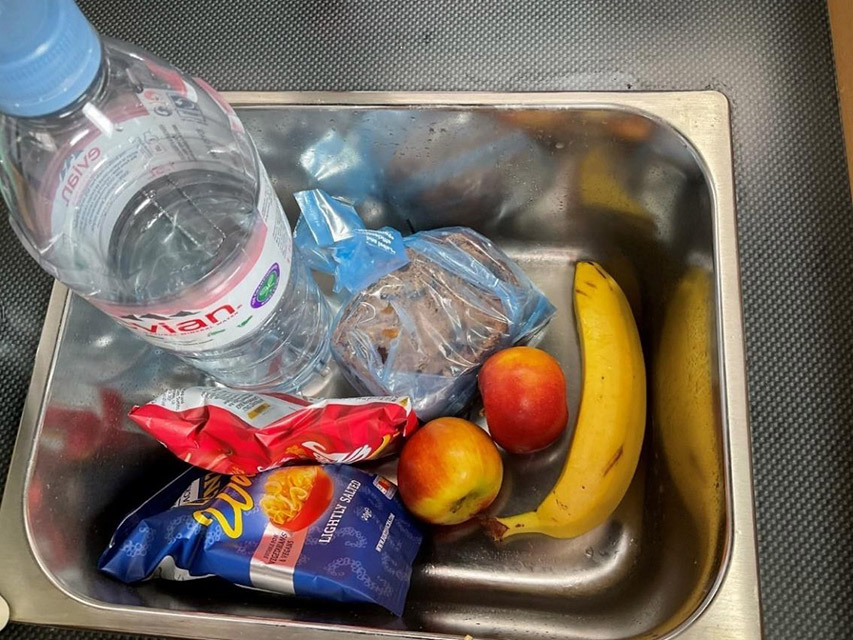 Whitsand Bay on the way to Fowey 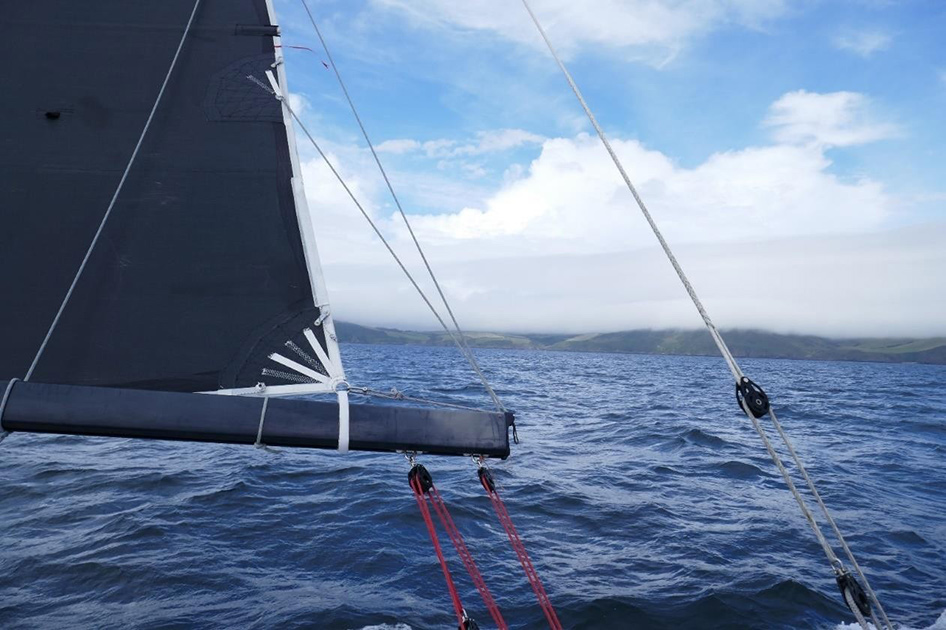 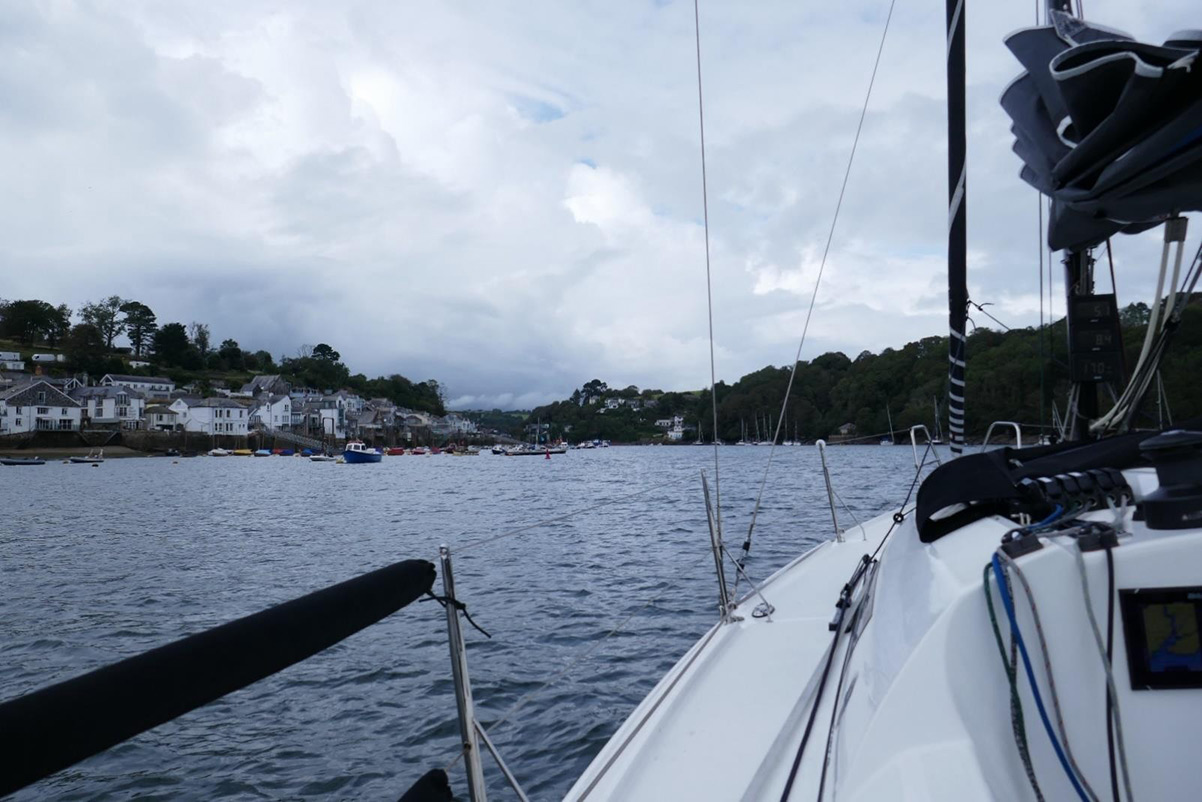 The evening meal was a quite a luxury, though had to be inhaled before tiredness took over.

Our berth at Penmarlam Quay Mixtow. 1.5nm up from Fowey river entrance. 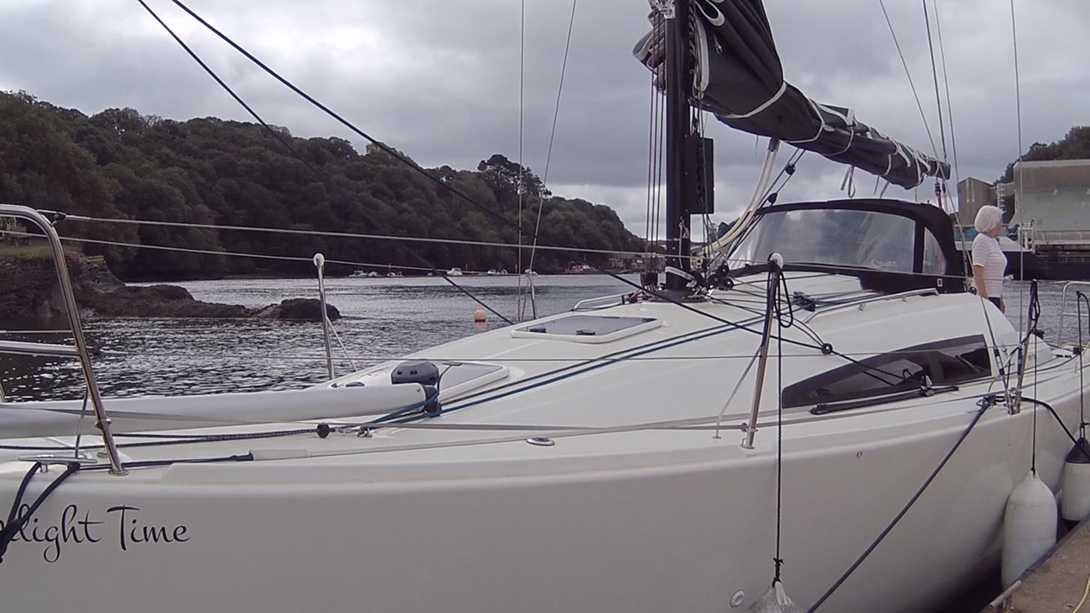 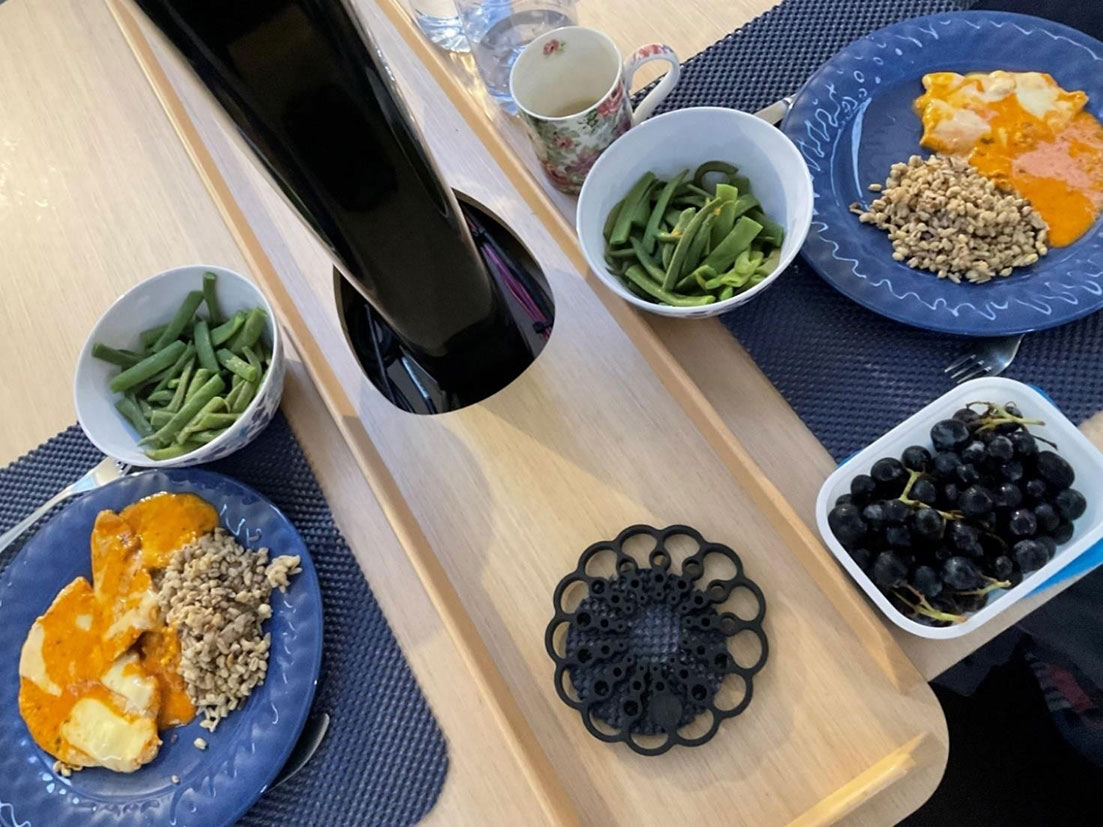 Friday was a day of rest. The plan: Dine out, admire the scenery and do a little walk. Reality decided otherwise. The walk involved a steep uphill followed by a crossing of fields and then a steep downhill to the Boddinnick Ferry.

Crossed the river into the town of Fowey. Steep narrow streets heaving with tourists. Due to crowds, nowhere attracted us to eat so kept on walking. Arrived at river mouth and took a ferry to Polruan. Again, nowhere attracted us to eat so ended up climbing the very steep village road up to the bluff overlooking the sea. There we found an observation/weather post that had recorded our arrival the previous day.

Now for some reliable forecast for tomorrow. Sorry mate all a bit weird at the moment. Rame Head has just contacted us reporting an unexpected squall going through. However, tomorrow looks good SW 10 to 14 knots at most.

Crossed back to Fowey side and agreed to go in the first restaurant. No go, no longer serving food and all fully booked for evening. Right, we take the first cake shop. All that were left were Cornish pasties. We perched next to a wall with seagulls dribbling at their beaks and ate our wondrous purchase. Next we hot footed it to the Boddinnick Ferry and returned to Twilight Time. I wonder why Cornish pasties are so sociable, they keep re-visiting you! Once aboard Crew put her hip joints in the cooly box!

That evening I went throgh N+1 calculations and realised that we had only one reasonable solution and that was to use our spinnaker to return to Plymouth. Even with a spinnaker, a West wind would take us miles out to sea whilst a SW could be optimal. I assumed that the day would start with a westerly and then back to a south westerly. Let’s plan to reach the WPT West 4 Fowey by 10:00.

During the night I kept waking up and going through the spinnaker raising in intricate detail. Gybing would be essential. Crew’s hips must function.

Ready for the off, spinnaker pole out. Saturday, 11th September 2021 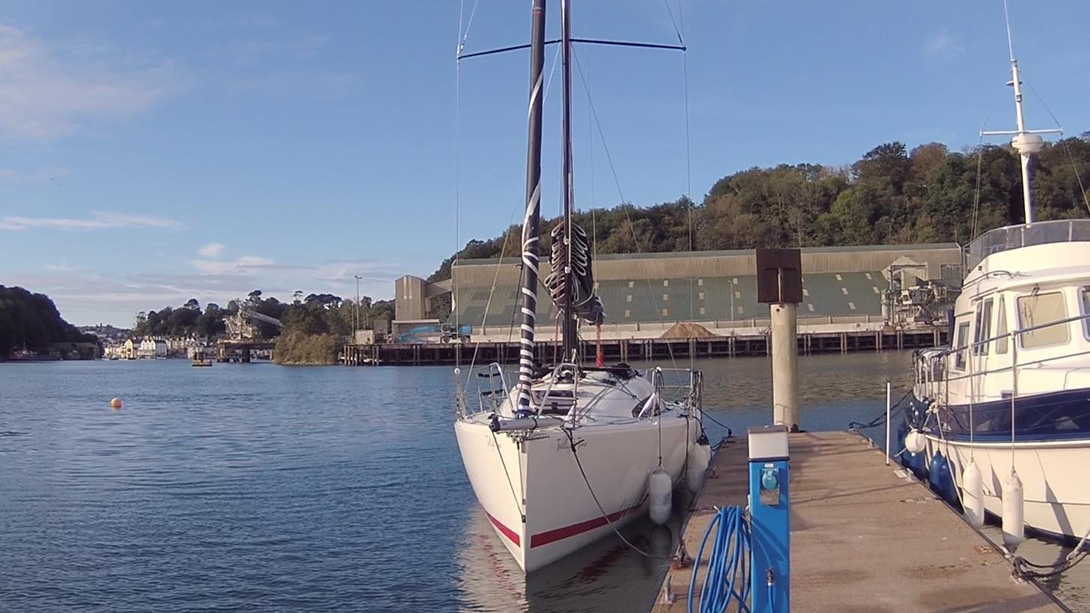 Polruan on South side of river mouth 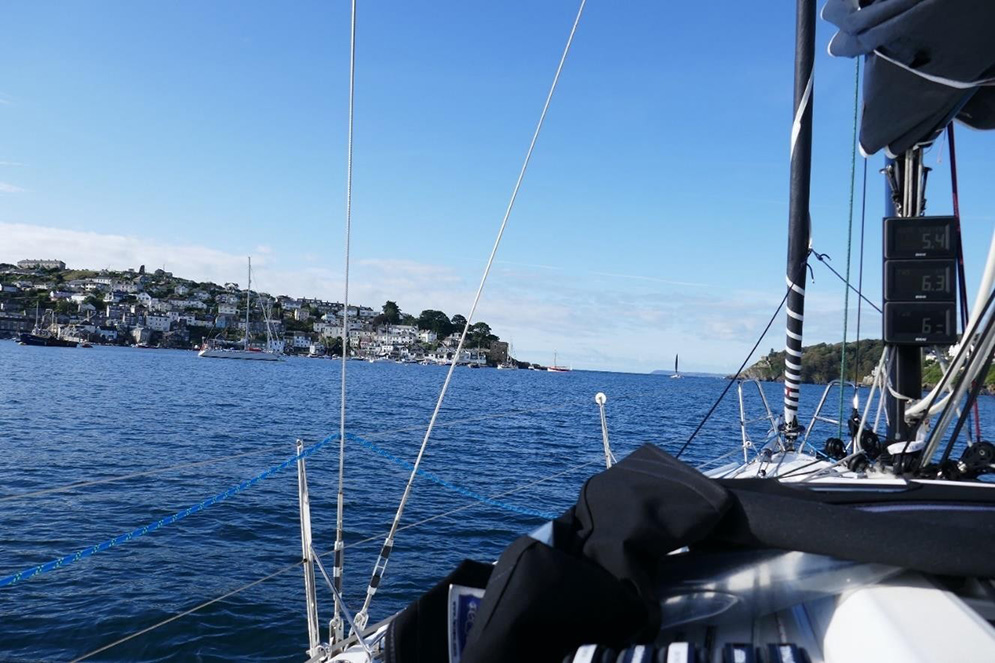 A little to the right of centre in the “Polruan” photo there is a boat with a very tall mainsail. We encountered this boat on the way down to Fowey, it was travelling towards Plymouth at the time. It turned and gave chase. At first I thought that it was gaining on us and then the wind increased off Looe and we drew away. After berthing on the Thursday, they came up river and called out to us and then buzzed off. On the Saturday, there they were just ahead of us. Clearly, they had spotted us on the move with their AIS. We finally overtook them before reaching the Eddystone Latitude. They could read our speed on the AIS just as we could read theirs, because both boats have transponders. We were averaging 0.5 to 1 knot more speed than them. They should have wiped the floor with us as their boat is a trimaran.

North side of river mouth. Just to right of small red tower is the residence of the actress Dawn French. 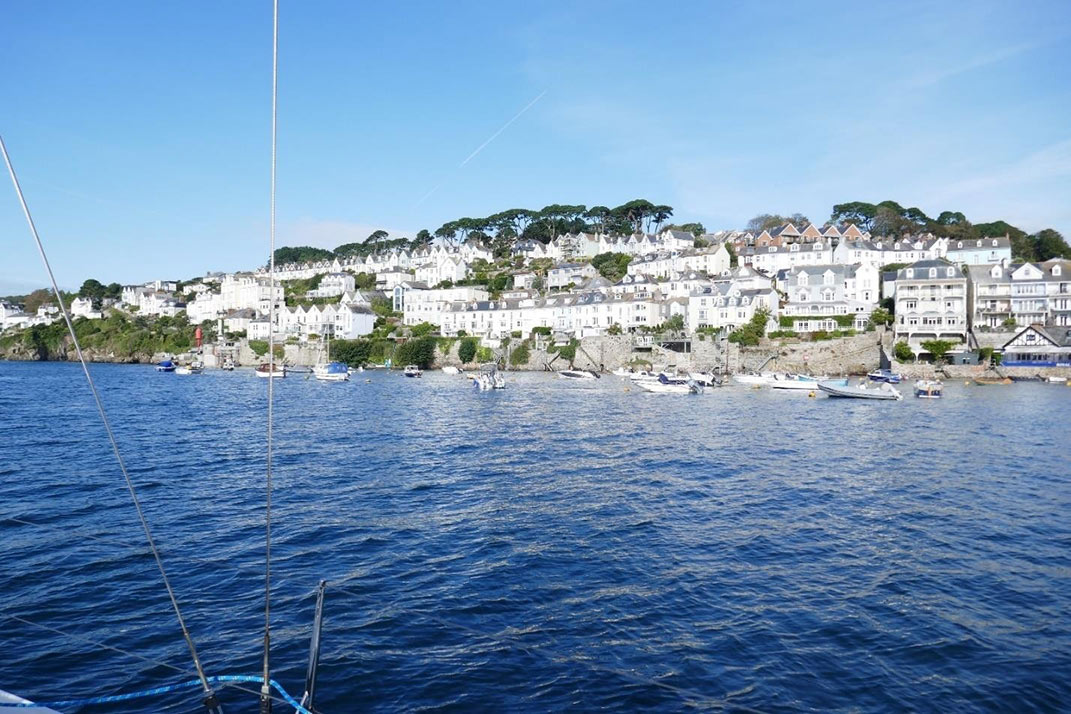 Out at sea with the spinnaker up and full concentration. 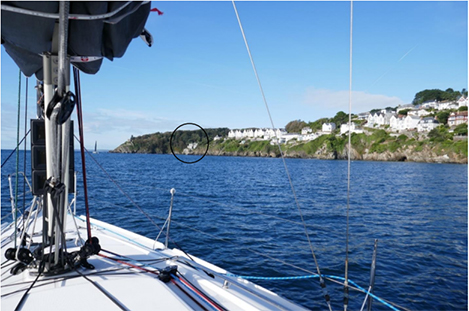 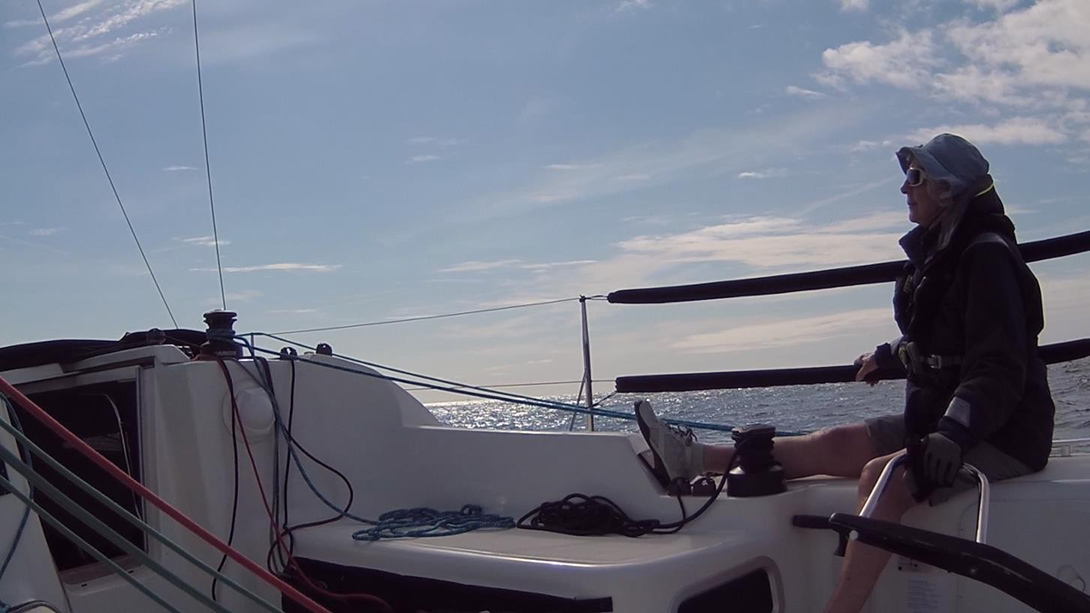 This is the lead the trimaran had at the start of our return trip just after raising the spinnaker. The chase is on. 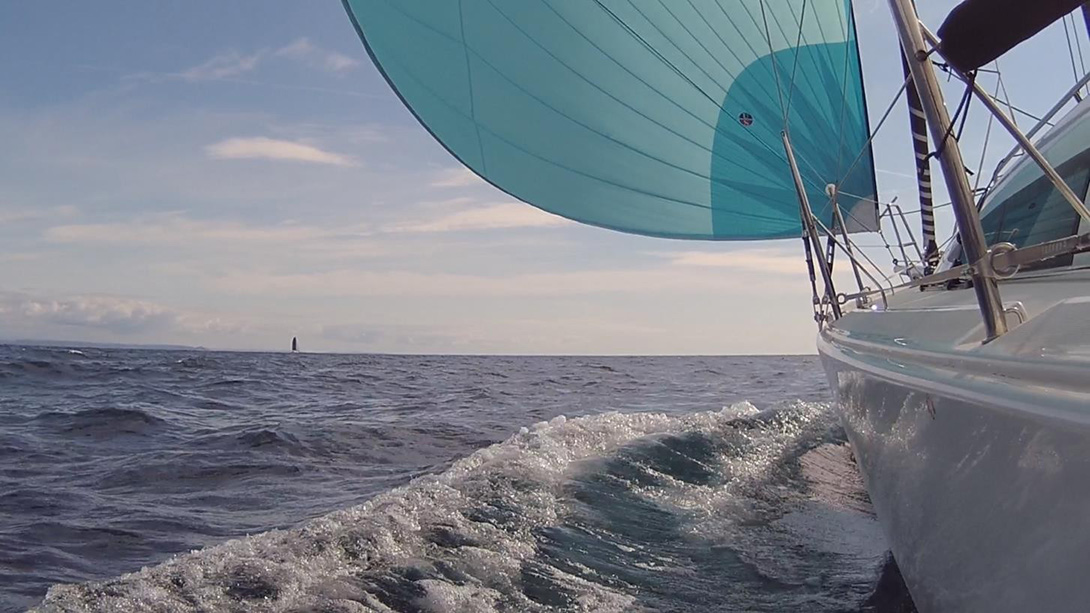 View of the coast on way home to Plymouth 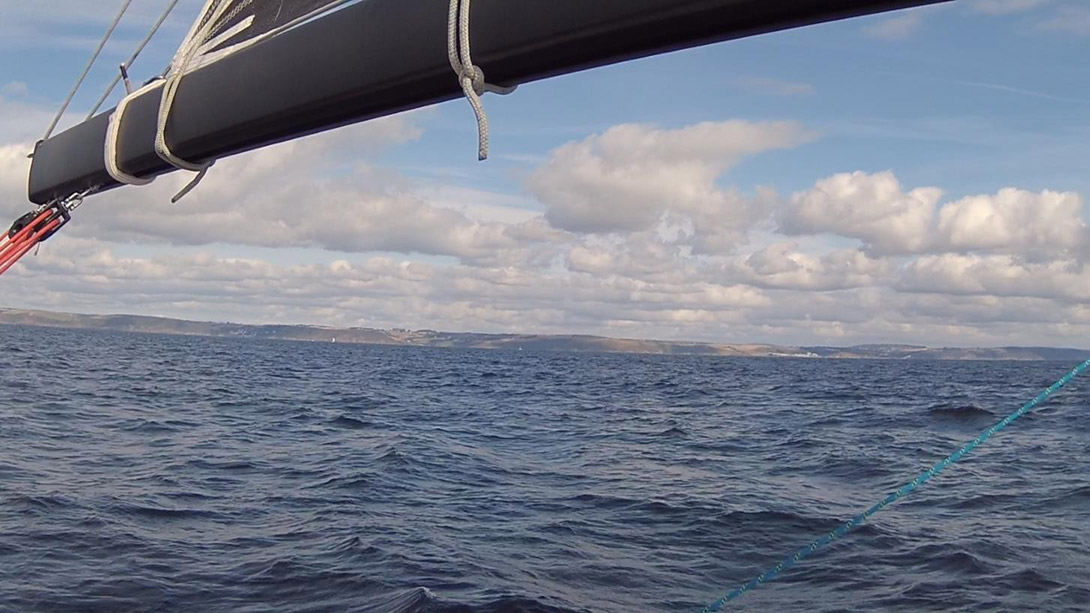 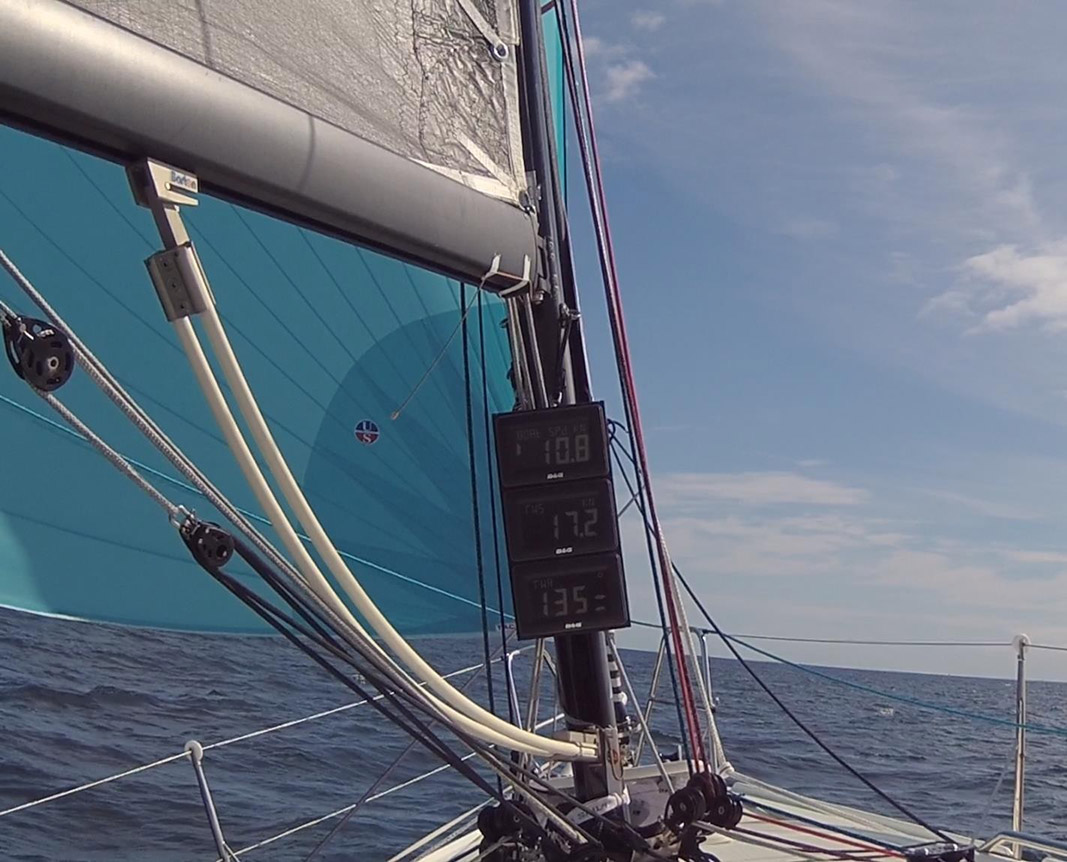 We berthed in Plymouth at 14:42 on Saturday 11th September 2021. A truly marvellous adventure and experience.

The next morning, in the absence of wind, we checked that the spinnaker and sock were not twisted by raising the sock to the top of the mast.

Our spinnaker in its sock.

Not all neighbours are to be trusted. The white and black motor yacht has just been seized by the Border Force. One English guy and 5 Nicaraguans were caught on it with a large haul of cocaine. It is believed that, among others, the bomb squad had to search the boat.

Sea Ventures (UK) Ltd is delighted to announce CHARTER ADVANTAGE, in partnership with the operator of the most modern fleet of charter yachts in the UK, Prometheus Sailing Limited